Immediately after coming home I was asked this question: “Why go there and pray? Why can’t we pray from here?” It was a question asked in humility and wondering, truly inquiring why we pray there and not here. It demanded an answer in my own heart. My response was immediate and the conviction I felt was strong. It was necessary….it is necessary, but why?

To be on the streets of Albania, looking at the faces, seeing the visible circumstances of life, there is this sense of the stronghold the enemy has in that country.  To be in a place where rather than a church on every corner, it is a city populated with mosques. I would not have known that in the safety and comfort of my own home. 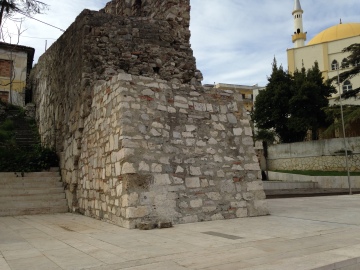 To hear the call to prayer from the minaret on the local mosque and have a chill run down my spine as I watched men head toward the mosque as the call went out. People mesmerized by the call and compelled to come headed up the steps and into the building. To be able to sit on the steps of an ancient city wall, with the mosque just on the other side, and to pray that when the call went out, fewer would respond as they sought truth, not ritual. To pray that hearts would burn with the desire to know Jesus and His Gospel. That is why there and not here.

We would never have met the woman who was the only believer in her village for some time. I would never have known that there was such a thing as one believer in a place, praying for her village and her people.  She would never have known that there are people in America (and probably other places in the world) that are lifting in prayer her country, her village, and her son (who is now the Pastor of the village church of 25 believers or so.) I am grateful for her perseverance and steadfastness. I like to think we were a tangible encouragement to her. That is why there and not here.

As a number of us worked on a painting project alongside the believers of the small village church and saw the hunger in them for God’s word and God’s work, some of our team members kept little hands busy and out of paint buckets. What a blessing to see one little guy about 3 years old go from being hesitant and standing on the edge of the group of children, to running as fast as his little booted feet would carry him because he was last man in. That is why there and not here.

I am grateful the question was asked. “Why there and not here?” It has challenged me to answer within my own heart. If I’m completely honest, I was most moved by the one believer in one village for who knows how long. That is why there and not here.

Thank you for the blessing and the joy of partnering in praying and giving here, so that I might pray there.

2 responses to “Why Pray There Not Here? – Agnes”