Operation Joshua 2019 is in the books!  Over 300 participants distributed nearly 80,000 New Testament Bibles to over 950 Greek villages this year! We didn’t deliver as many Bibles as last year, but there were more mountainous villages and they were spread out over the rocky terrain.  This year’s team from The Orchard was twice this size of last year’s team and our team sure had a blast distributing God’s Word!

The team had several positive encounters as we traversed the cities and villages, but one story comes to mind. That day, we had a rough start because we were met with opposition in one small village as we were distributing our Bibles.  They did not accept the Bibles, so we moved on.  We hit a few more villages on our route that day, and had one more small village to go before returning home. 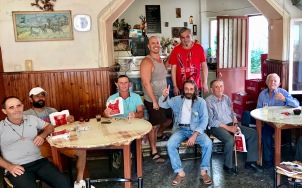 That last village was very friendly and receptive, and we were met with many smiles and most of the villagers enjoyed the free “gift” we had given them.  We came upon the town cafe where 8-10 men were having coffee and relaxing.  When we offered them the Bibles they were overjoyed and invited us in for coffee.  We even gave them some of the extra crosses we were wearing and took a photo together.  Perhaps they will be receptive to having a Bible study in the cafe or discussing the Word with members of Hellenic Ministries in the future.

Overall, we felt honored and blessed to be doing God’s work in Greece this year.  “Blessed to Bless” was the theme of Operation Joshua this year and we return home feeling overjoyed and blessed!