Today was not our usual day for camp. We got to spend the day at the beach! Even just walking to the beach was a great experience because I was able to talk to many of the older students about a bunch of cultural things that differ between Hungary and America. At the beach there were still more chances to bond with the students. We had a huge group of both Hungarians and Americans playing a game in the water that we made up involving keeping the ball away from the other team, working together and a ton of laughing and cheering. Lunch was also an especially great experience for students of all ages. They got to practice their English, were very helpful while translating the menus, and we all had very great conversations that lead to us all getting closer with the students. 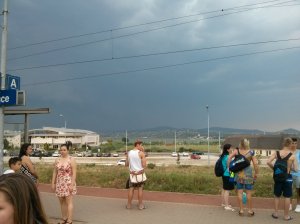 I have a story to share. Imagine a ninety-nine degree day under the scorching sun in the lovely country of Hungary. We have a group of one hundred and fifty people running around the beach to look after. After three hours of games, burning our feet on the scalding sand and attempting to cool off in the lake, we head up to the train station to go back to the ministry center. All day the adults had been telling us that the forecast was predicting rain, but they said they thought it would be no big deal and it probably wouldn’t hit us. While waiting for the train, the wind started to pick up, blowing trees violently and whipping sand against our skin and in our eyes. In the distance we could see the rain and we knew it was only a matter of time before it reached us. After being amazed by the strong winds that could and were throwing us off balance the rain started light but quickly turned into a storm like none of us had ever experienced (without the protection of a sturdy building). We tried to shield ourselves using towels and jackets but it was futile. By this time we were informed that the trains we all running very late. We also attempted to escape the vicious winds and rain by hiding behind the glass waiting area (the box area with a bench where you sit while waiting for a train or bus). Finally we decided it was far too dangerous to be out in the insane storm and we ran to the tunnel area at the train station. It was almost as scary as the weather. There was easily over three hundred people all crammed into the space and trying to stay with the group was impossible. After ninety minutes at the station a train finally arrived and all one hundred and fifty of us scrambled frantically to make it onto the steamy sauna of a train. Once on the train we survived the hour and fifteen minute ride (it normally takes thirty minutes) of human sardines and by God’s grace we made it back safely without injuries or loosing anyone.

Over all, the craziest thing was what God used the experience for. Most of the time both Hungarians and Americans were singing worship songs and it was a stellar reminder of God’s grace and power. Not a single one of us could have predicted the crazy events that occurred today but God could, and he helped us through the whole thing. There is no way that we could manage to survive the storm and catch the train without loosing any of the students without God’s help. Today he chose to remind us that he always looks after us and we should never forget that.