After a long first day of camp, the second day couldn’t have come any faster. We were worried about waking up at 3 a.m. but most of us agreed that the jet lag was finally starting to wear off. Thanks to the buses we were a little late to our devotional time, but that didn’t matter because the Hungarians were just happy to see us there. Tyler spoke from Psalm 47 which reminded us all of how powerful God really is. We started the day with an intense “Cha-Cha Slide” session which pretty much just ended up in a giant dance party. 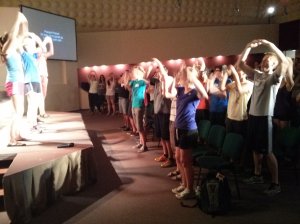 English classes were next, and as I talked with the team and the volunteers it seemed that the English classes got off to a much better start than yesterday. I was bombarded with funny stories from the other teachers during snack time which consisted of delicious Balaton bars. They are pretty much like massive Kit-Kats. Worship came next and everyone jammed to Pharaoh, Pharaoh and Lord We Lift Your Name On High. After that, the Hungarians heard a testimony from a volunteer named Andris, which was completely in Hungarian so we didn’t understand it. He was kind enough to give us all a small summary of his testimony which was how he had to put faith in God because there were problems in his life and the lives of his friends that he couldn’t solve on his own. After his encouraging message to the Hungarians, we all listened to a message from Betsy about what it means to be holy and how being a Christian doesn’t mean that you are perfect. The Hungarian volunteers were kind enough to let some of our Chicago team into their discussion groups for the remainder of the two weeks and I was lucky enough to be included. (I will touch a little bit more on how that went after I finish talking about the remainder of the day.) After our second round of English classes, which only seem to be running smoother and smoother, we were all thankful for the level of acceptance the Hungarians gave us today.

I ask for prayer as we continue throughout these two weeks that the bond between us and the Hungarians would continue to grow because forming close relationships makes evangelism a lot more personal and ultimately that is what we are here to do. Much like yesterday it was very, very hot and our outdoor game leaders decided that today was the perfect day for capture the flag. (Yes, Jake Nordman, I’m looking at you.) Fortunately we all had enough water and no one ended up passing out in this 95 degree weather. Eventually it got too hot and we decided to come inside and play a couple exciting rounds of four corners. We ended the day with discussion about our upcoming beach day and the campers left pumped for the fun in the sun we will all have tomorrow.

The most unique experience that I have had this far is the opportunity to sit in on the Hungarian small group. I was privileged to sit in with one of the volunteers, Piri, who seemed very quiet but proved to be an effective leader in a small group setting. Her calming presence invited everyone to open up on their own in a way where the students wanted to speak. The entire discussion was spoken in Hungarian so the only English during the small group was from a girl who asked, “Why are you here?” The only English I had to go off of was a question sheet the staff was kind enough to translate for me. I sat there and had absolutely no idea what these students were saying to each other, but their laughing made me smile and I found similarities in their responses to questions like, “What are the five most important things in your life and why?” It was such a blessing to sit in on their class today and I’m excited to be involved with Piri and her small group for the rest of camp. I also ask for prayer for the Hungarian small groups these next two weeks because these are the most Gospel centered times for the students during camp.